All climbing is good climbing

It looked like the weekend of March 18th was going to offer up some good climbing.  It rained a bit on the drive down on Friday, but cleared up overnight.  Unfortunately, we woke up on Saturday to some pretty rotten weather... 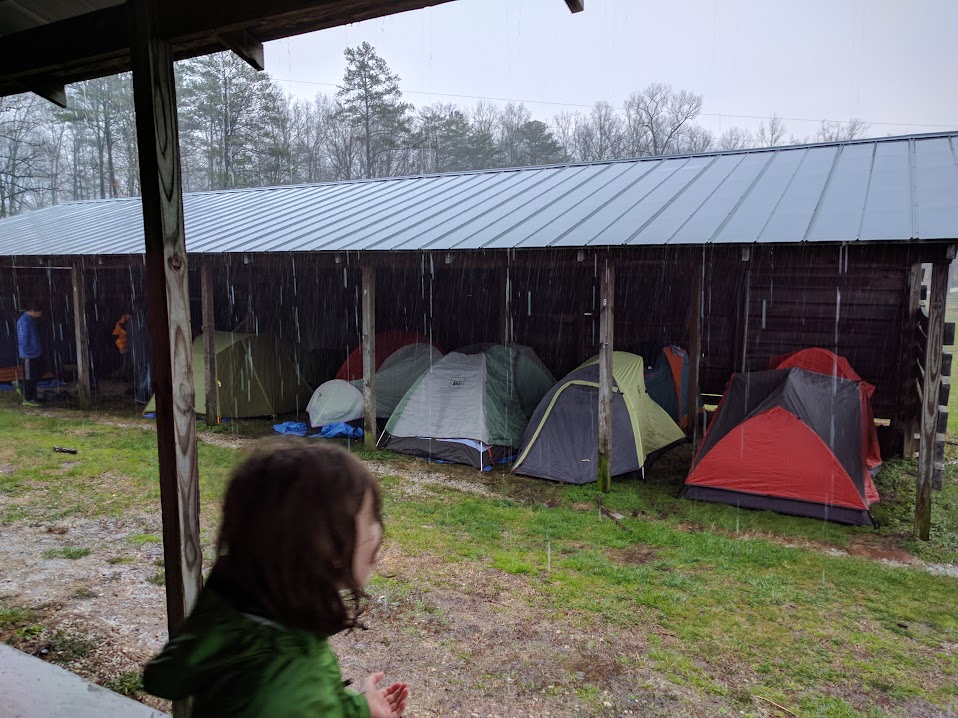 The rain let up around 10am, but by this point there was a lot of water on the ground.  The highpoint of the weekend was following Ida around the field at Linda's.

Any rock exposed to the weather was soaked.  The rock was cold from the weather the week before, so even the overhung climbs were damp with condensation.  We headed to Drive-By crag and got on some of the popular 5.10 routes, but even those were pretty treacherous.

I'd gotten on Fire and Brimstone (5.10d) last year and sent it on the first go, but the sloping side pulls that get you up the wall were covered in slick chalk slime and I had to sit on the rope a few times to find new beta to get me through.  Ana got it on top rope without much fuss.  Sam bailed off without even getting to the top.  A shame, because toward the top is one of the best rests in the Red: a huge chunk of rock juts out of the face and forms a perfect saddle to sit on.

A Wave New World (5.10c) is a bit stiff for the grade, with a pretty beta-intensive crux move that feels solidly 5.11a on a good day.  I almost got the redpoint, but couldn't latch the crimp on my first go.  None of us sent it cleanly, but given that it threw off some much stronger climbers, I didn't feel too bad about it.

We hung out for a bit waiting for things to dry off.  Wanting to get my 5.11 for the weekend (my goal going in was to flash 5.11 every trip this year...) we wandered Whip-Stocking.  There was a line, so Sam led Deeper is Better (5.10b) next to it and got it without much trouble after a fall on the 2nd bolt.  I top roped it and by the time I lowered off was not feeling up for anything much harder.  The overhang on even easy routes in the Red takes its toll...

We'd never explored the far right of the cliff and decided to get on Mud on the Rug (trad, 5.6).  On a dry day this would probably have been a lot of fun, but I felt shaky the whole way up and the gear placement toward the top had me putting cams in what felt like relatively chossy stuff.  Hundreds of pounds of outward force generated by a cam in a fall can rip big flakes free and send them earthward. Given that almost every close call we've had while climbing has involved rock or gear falling off the cliff, I decided not to risk it. Instead of going up and topping out, I traversed out to the anchors of the 5.10a sport route next door and lowered off 15 feet early.

A nice dinner at the Rock House that evening felt much deserved.

Sunday morning was a bit drier feeling, so we headed to the Zoo.  I'd forgotten that getting to the cliff involved crossing a wide stream.  Everyone took different paths.  Ana went back downstream to find some rocks to cross.  Sam found a tree trunk to shimmy over, but it looked a little hard for Leo.  I decided to ditch shoes and wade across with Leo across.

First I had to schlep our bags and the clip stick over.  Then I'd return for Leo.  In retrospect I should have done it in one heavy push.  The water was moving fast and so outrageously cold that by the time I made it to the opposite side to drop my bag I was in what felt like the most excruciating pain of my life.  I thought I was going to collapse in the middle of the river but managed to make it. After a breather, I went back for Leo and collapsed on the bank.  After a short bout of screaming and crying, I hauled him over.  Everyone thought I was exaggerating about my discomfort. I was not. 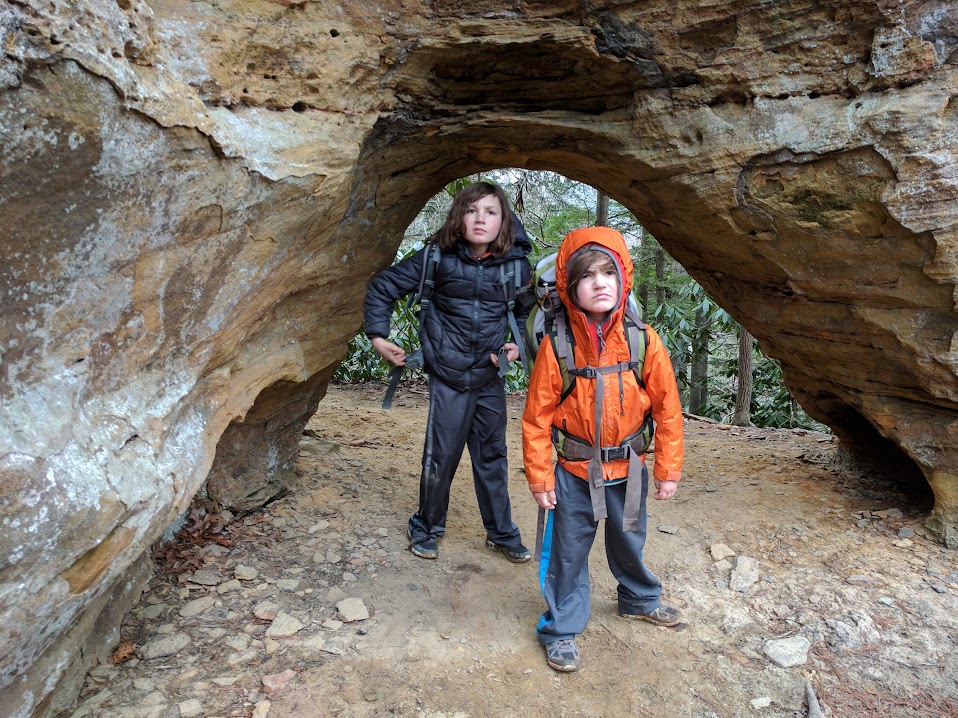 I'd played around on Edgehog (5.11a) in April last year. I did all the moves, so I figured it'd be a good candidate for a send this year.  Plus, it's one that's so utterly blank that unlocking all the moves on teeny tiny ridges feels like a superhuman feat.  Any fit non-climber can brute force up most 5.10+/5.11- routes with lots of falls and lots of resting, but this one is different.  It's a really technique intensive piece of rock.  All core tension, precise feet and tiny crimps.

With the moisture and lack of chalk ticks, I wasn't able to find the right line or the friction to get it on the first go and I took pretty jarring fall.  By the time I finished it, my aching middle finger A2 pulley was telling me not to take another run at it.  Next time!

Ana made the chains after a couple falls. 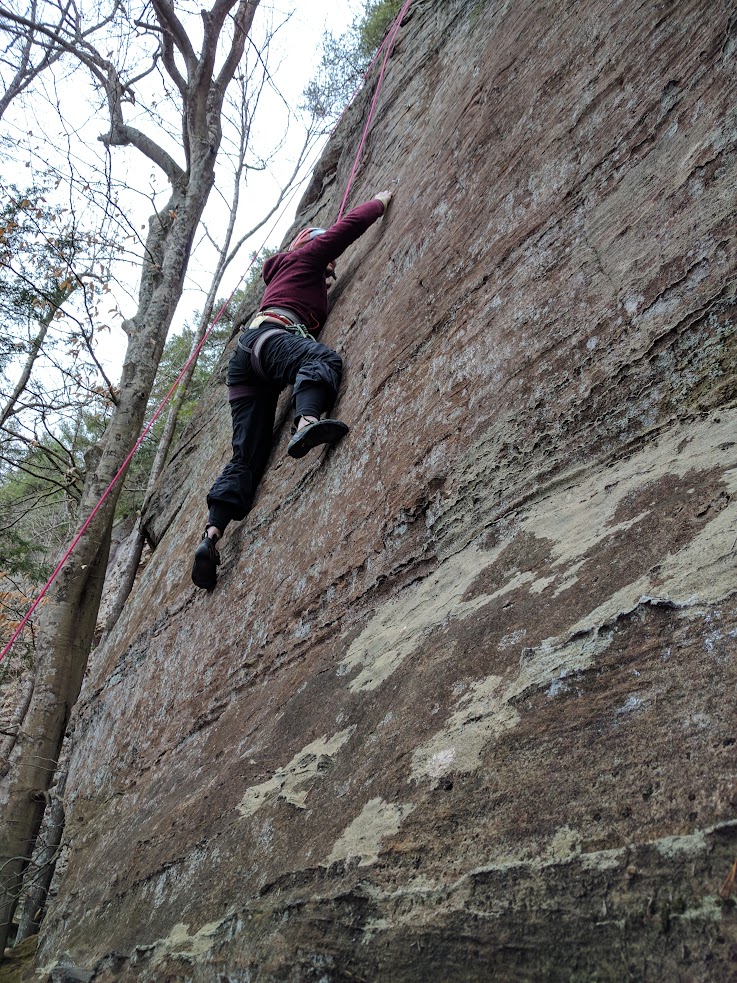 Sam sent it clean on top rope.  Kid is getting pretty damn good... 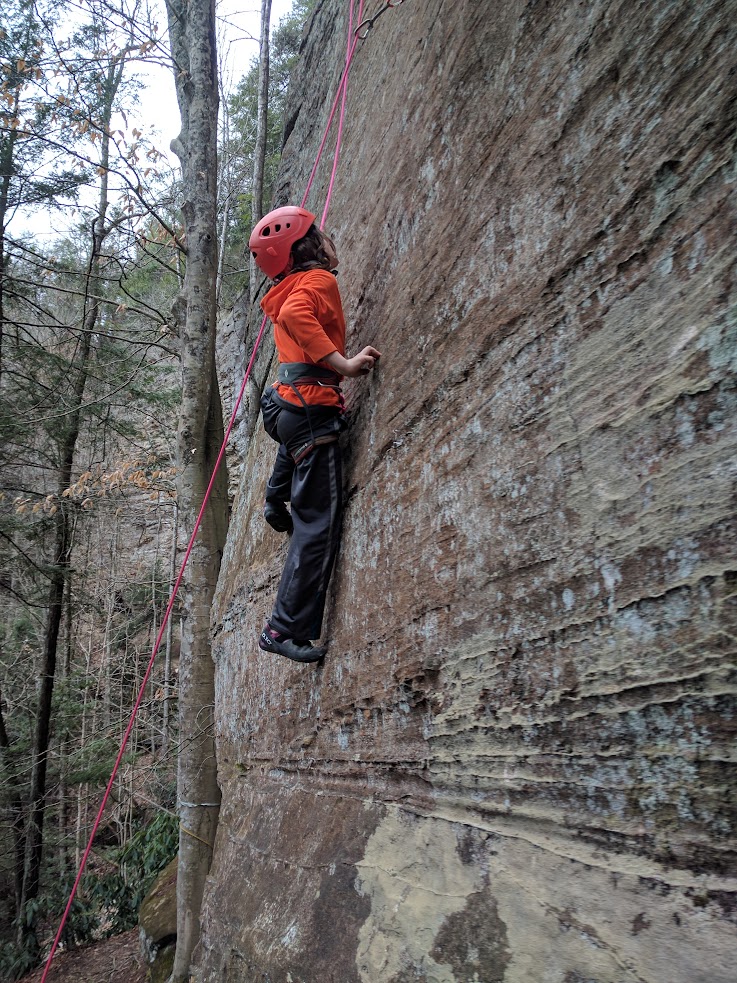 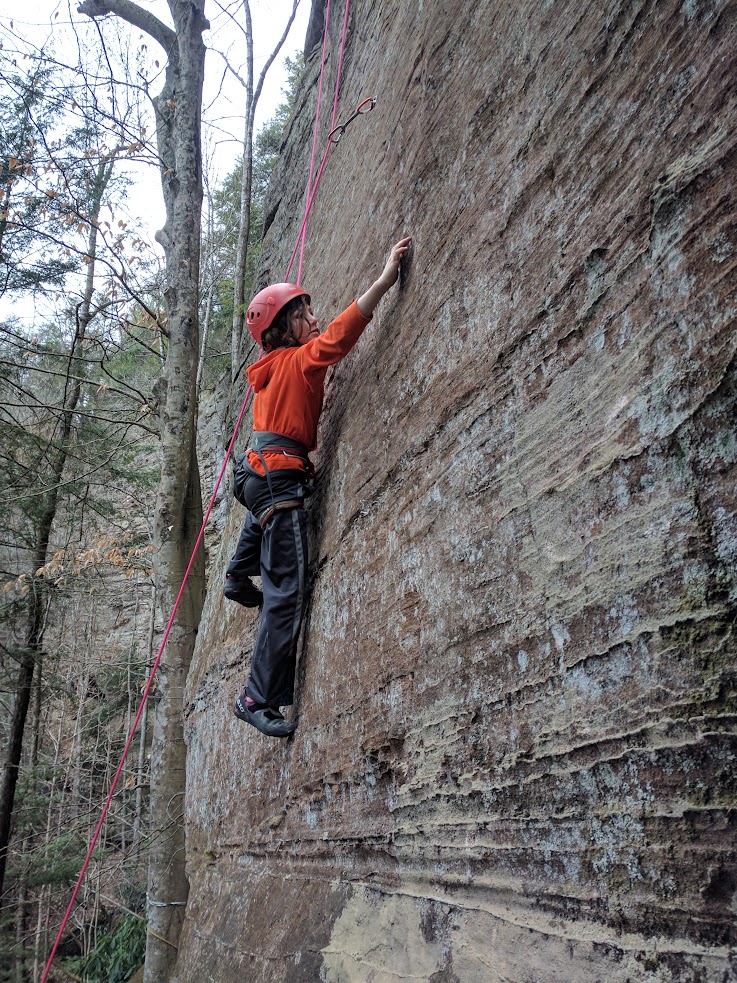 Cold and wet, it was time to pack it in and get home.