Tuesday's forecast was beautiful, and most of the Ann Arbor gang decided to head to Fortress Wall, one of the largest trad climbing walls in the Red.  After Ida had finished her morning wander, we hit the road.

With so many hands on hand to help handle Ida, we were able to sneak in a rare multi-pitch climb.  Hobbs, Sam and I got on Bedtime for Bonzo (5.6), which had been on my to-do list for the last year.  I took one end of the rope, Hobbs the other end, and Sam tied himself in 10 feet in front of the follower and the two seconds climbed together (really only a good idea on a route this easy).

I led the first pitch.  Hobbs got the harder 2nd pitch.  After getting to the ledge at the top, you walk around a corner and into a hallway where you belay the leader for P2.  Someone disconcertingly, a rotten 12 inch thick tree had fallen over the top of the corridor, with one end supported only by a couple of branches about as big as my forearm.  You had to climb past it, trying not to jostle the thing.  If the branches broke, the thing would come crashing down into the belay area.  Fun.

The second pitch was fantastic.  You come up a dihedral that makes up one end of the corridor, which feels very safe and enclosed.  Then you traverse left with hands in a big horizontal shelf.  A few seconds later you come out of this safe feeling start and are WAY high up on a cliff face with nothing around you.  Amazing exposure.  An easy horizontal crack system leads you right to the top and an awesome view. 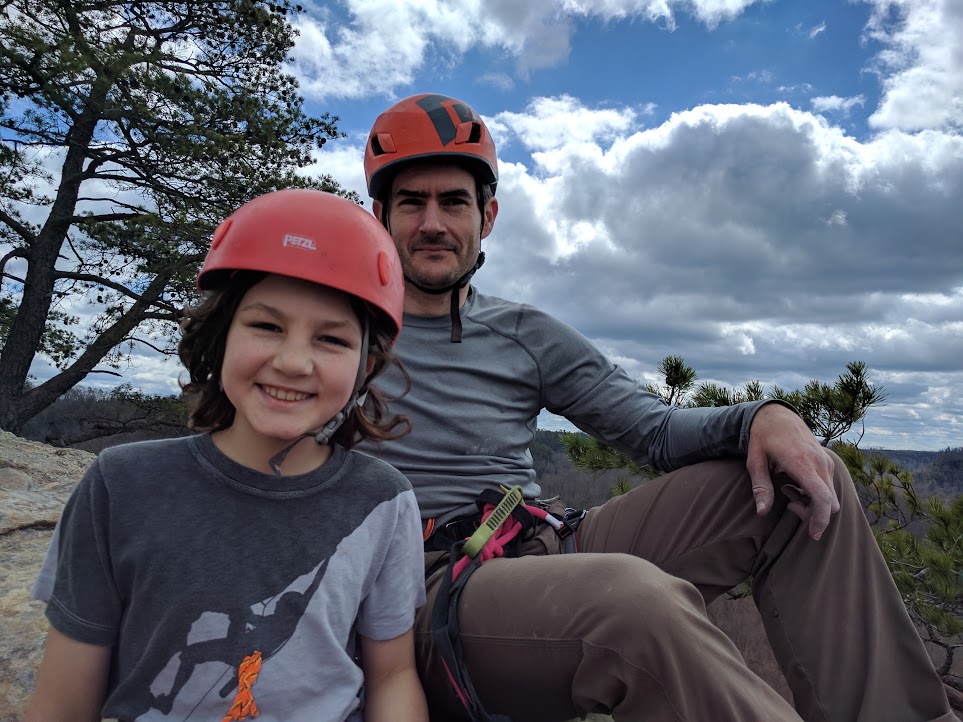 We rapped off the back side of Bonzo and found ourselves at the base of an easy pitch of trad climbing that wasn't in the guide.  Probably 5.3 or so.  Sam led it and set up a top rope for Leo. 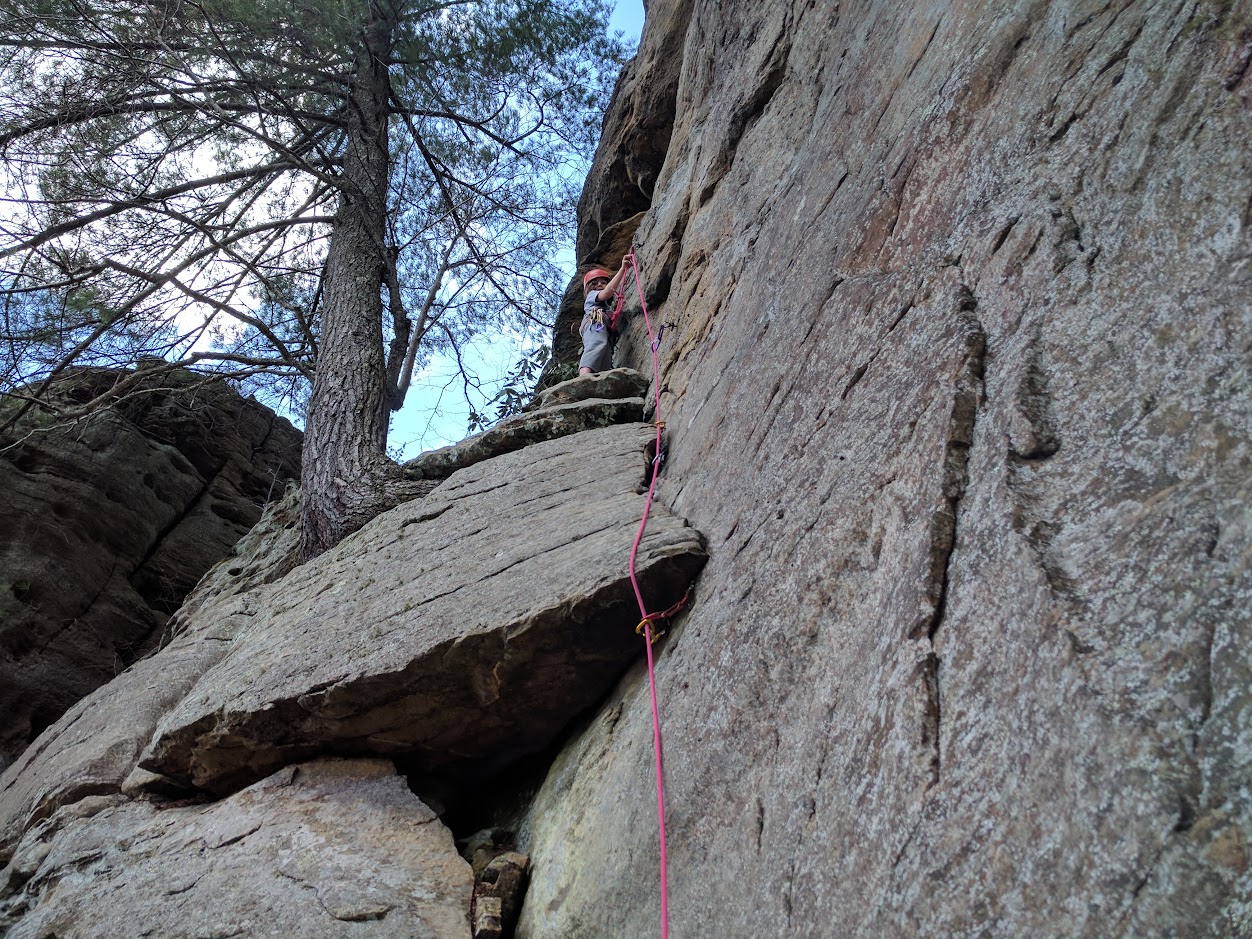 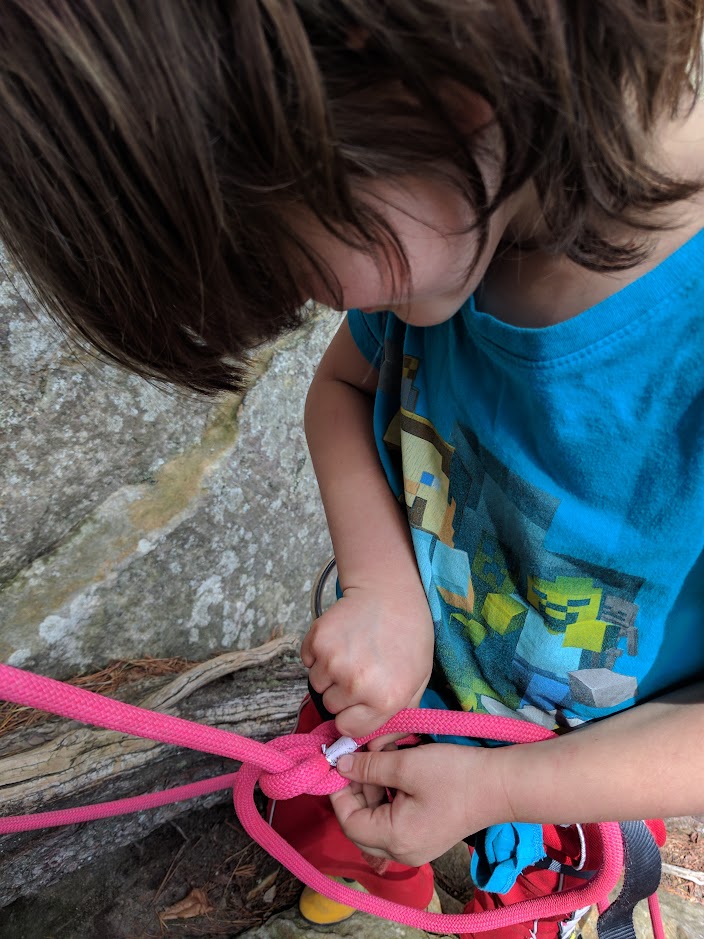 After cleaning our gear, we headed back to the base of some climbs we'd done before.  Hobbs and I took turns leading Snake (5.8), a personal favorite that features a short section of really fun/awkward offwidth about a third of the way up.  It was much, much easier this time around, especially with that big #5 cam to shove in the top half of the wide part.


We ended the day on  Calypso I (5.7), a route I hadn't tried before but which was really fantastic.  I'd never even looked at the climb in the past, turned off by the description of the start as being a scary unprotected 20 feet up to a ledge.  Turns out it was an easy series of big blocks I'd have been comfortable climbing before I was a climber.  Super relaxed climb up a flake with great hands the whole way.  Probably easier than Calypso II and III (5.6 and 5.5).  I fell pretty hard on a .75 C4 last year on the former when I slipped.

A stray dog had shown up at the campground and made trouble all week.  Ida spent the entire evening shouting (I think) WHERE "ARE YOU DOG? ARE YOU DOG?"

That evening he was hanging out in a tent with this 12 year old who got a freekin' 5.14c (Lucifer) later that week.
Posted by paustin at 12:32 PM