March started off with lovely weather on the first weekend so it was time to get back home to the Red for a couple of days.  We loaded up the truck and hit the road after school.  We rolled into Linda's around 10:30 and had camp set up by 11:30.  Not bad for the first trip of the 'official' season. 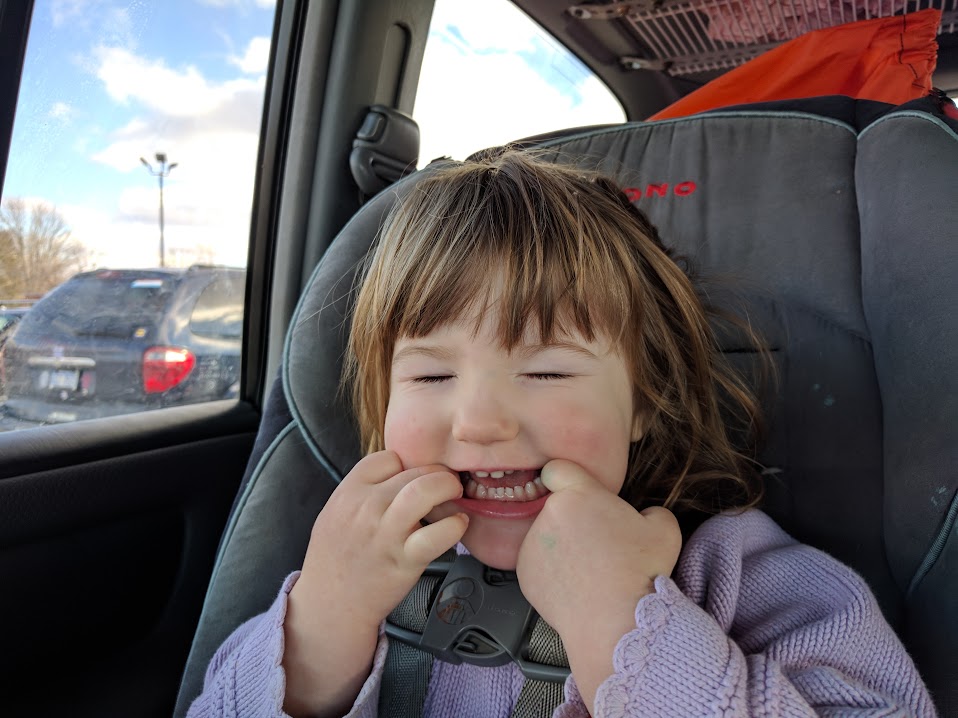 With great weather and a jump on the peak season rush, we headed straight for the Gallery, which is THE crowd pleaser wall in PMRP.  This thing has something for everyone.

We warmed up on 27 Years of Climbing (5.8), with Sam taking the first lead.  This was his first real outdoor lead last year and is a really delightful piece of rock for the grade. Suitably warmed up, we got right on the day's goal: Johnny B. Good. The route starts with a pretty easy ~5.8 slab that anyone could climb, and then dives in to about 25 feet of seriously overhung jugs that take you to the anchors.  Sam missed getting an onsight by a hair, mostly due to a fumbled clip, but I managed to flash it thanks to the pre-hung draws.  We pulled the rope and he got the redpoint on his second attempt, his first 5.11 redpoint on lead.

After that, we hopped on Murano (5.10b) and sent it without much fuss.  I can't remember if we've done it before, but it's a fantastic climb with a nice series of insecure slopers on the slab at the top that forces you to do some careful climbing.

We finished the day on Preacher's Daughter (5.11a/b) that I wanted to try in the past, but always got a little intimidated by it.  From the ground it looks pretty blank.  Once you start moving up,  the holds appear, but it doesn't get any less scary.  The bolts are spaced far enough apart that you'll be taking a big ride when you fall.  I was OK until a move high up on the face.  I went left instead of right and found myself hanging on a heel hook at head height, the previous bolt about 7 feet down and a ledge 5 feet below my butt.  I didn't want to slip and clip the ledge with my backside, so I wussed out and pushed off for a nice 20+ foot whip.  After a breather I took a different path and made it to the chains in one piece.  Fun stuff!

I told Sam he'd be better off skipping this one, and he opted to run up A Brief History of Climb (5.10b), which is another classic.  A single hardish move guards the 3rd bolt.  After that, it's a hilariously fun romp up huge holds to the finish.  Ana cleaned it, but I sat this one out.

Finally, we wandered around the corner to Volunteer Wall for the first time, looking for something a bit more Leo friendly.  We found it in First Time, a fun little 5.8 along an arete.  Leo got up with no great fuss.

For her part, Ida started the day strong...

...but ended it looking more than a little tired of the adventure.

On Sunday we headed over to Phantasia and got on Attack of the Sand Shark (trad, 5.9-).  For whatever reason, this style of climb (crack up the inside of a dihedral under a huge roof) is a really common sight in the Red.  Or maybe it's not that common, but people are just drawn to these features because they look cool and stay dry in the rain.  Either way, the big open book with a roof on the top makes the face feel enormous and intimidating when you're standing at the base.  Pictures can't do it any justice.

My first impression is always "that's terrifying.  I can't do that."  After a moment, my focus drifts to the climbing line and the 'weakness' in the face reveals itself, leaving me feeling apprehensively giddy. 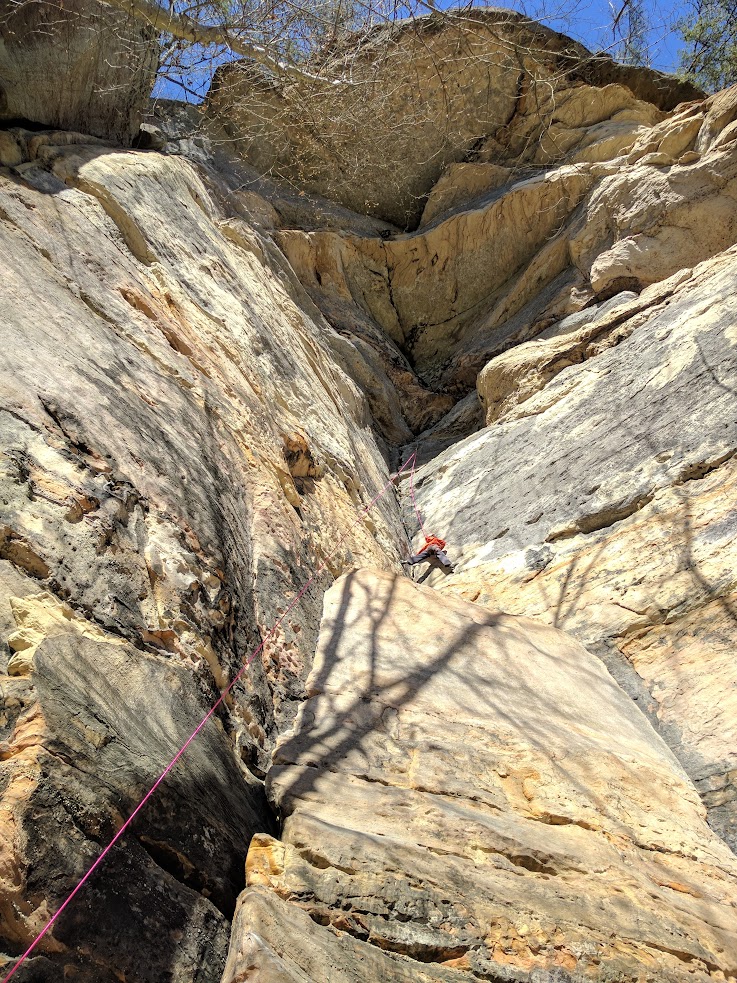 I suck at pure crack climbing, so I gave this a whirl trying to make minimal use of the faces.  I was OK until it narrowed to finger width at the top, at which point I started throwing in lots of protection so I could hang out and futz around trying to find the best way through it.  Sam and Ana waltzed up it on top rope by doing the sane thing and stemming the faces the whole way.  Leo made it up the slab to the top of the first ledge without too much fuss. 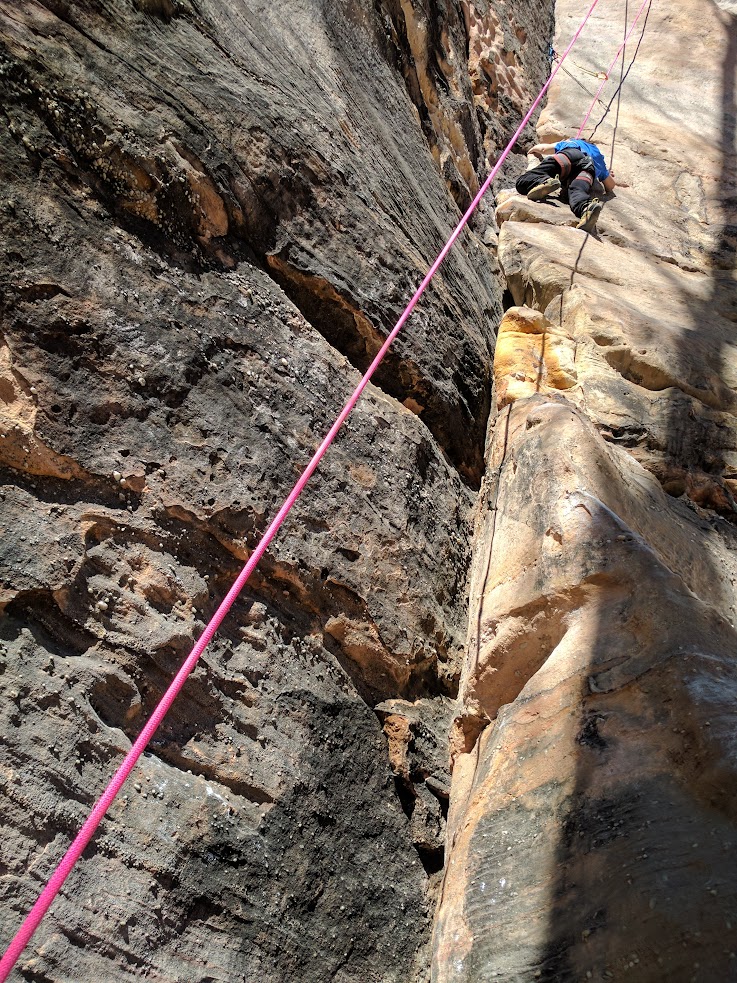 A fun climb, but probably not one we'll come back to unless we're in the neighborhood. You hear it over and over again in the Red: at most crags this would be classic five star stuff, but it's merely average here.

Ida, for her part, spent a lot of time on this rock. Her horse.