Spring break started with a local climbing comp in Madison Heights. The comp only counts in terms of participation (you need to attend two to qualify for regionals) and Sam completely half-assed the thing.  He climbed two routes and we left 1/4 of the way through so we could get out and climb some real rock.  Good boy.  I used my 25% "team kid parent" discount to grab an absolutely gigantic #6 camalot (more on that later!).  Then we went home, grabbed the rest of the family, and pointed the truck south.

Sunday morning was gorgeous, and we decided to head to the much more recently developed Miller Fork to climb somewhere a bit quieter than the more popular crags. We started the day at Chaos Wall where I had a couple routes I wanted to tick.  Big plans for the #6, especially.

We warmed up on Dyslexics Untie! (5.7) with Sam leading it.  It's nothing special, though I have fond memories of watching a pair of morons walking through cleaning and rappelling off the route last year.  Rapping is the scariest part of climbing, and these guys made it quite the show...

"WAIT! MAKE SURE YOUR SAFETY TETHER'S CARABINER IS LOCKED!"

It was at this point we stepped in and started talking the guy through it before his buddy got him killed.

We followed up with Lithuanian Princess (5.10a), which is fantastic.  Huge, solid holds on steep overhung line.  A distinctly RRG type of climb.  Easy 5.10 gym climbing moves, but you definitely get a burn in the forearms from the overhang.  Fun to listen to strong climbers from other parts of the country climbing. Sweetbabyjesusthisissteep...

Meanwhile, Ida was having her own adventures.


Suitably warmed up, Sam and I took a couple cracks at Spider Monkey (5.11b).  This line was damp and dirty last year, but has cleaned up quite a bit.  You get about 25 feet of solid bouldering up and along almost horizontal cave roof before the crux-y transition out of the cave and onto the more vertical face.  Past this point the climb turns into a 5.8 walk to the anchors.  We clipped the first bolt (out on the face, so it's basically a useless gesture until you get about 2/3 of the way up the cave roof because you'll swing straight into the dirt) and borrowed a crash pad.  Sam hopped on and got very, very close to completing the cave but wasn't able to see the pocket he needed to hit.  We did a bit of "no sam, it's 2 inches higher!  reach for it!" but he eventually popped off.

My turn, and I cruised through the cave and made the first move up onto the roof.  I struggled through the crux and was feeling super relieved to be on solid ground.  I got up to the second bolt feeling great and...realized Sam still had all the quickdraws on his harness and I had to lower off.

We eventually got to the top, but were too pooped to do it without falls.  Worth coming back for, though!

I'd bought that big cam for our next target, Broken Dreams (5.8 trad), a perfect 20-25 foot offwidth nestled in the corner of a dihedral.  No face holds to speak of until you're at least 20 feet up and can get the shallow ledge/pocket on the right.  The landing down below is brutal, with a
couple narrow ledges to bounce on.   I've never done one like this, and offwidths have a bit of a reputation, but I figured I was pretty safe anyway.  My #5 was just big enough to fit the crack without being on the tip of the cam lobes and the #6 was as bombproof as cams can be.  I'd just walk the two cams up, over my head, easy peasy. 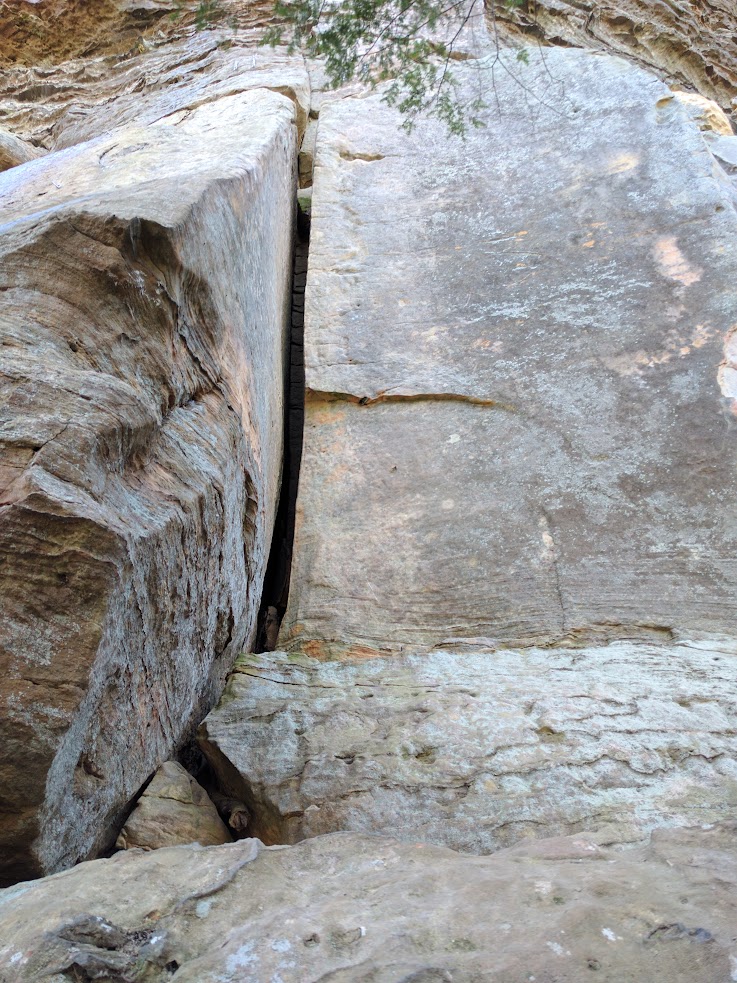 Oof.  The crack was just a little too narrow to get my leg into, but not narrow enough to get a foot placement.  Instead of going up the crack, I had to grab the edge, lay back, and put my feet on the left face.  This was ok, but it was strenuous.  Constant tension was needed to keep my feet glued down. Oh, and it meant my head was way off to the right and I couldn't see my cam placements.

Half way up, the crack widened just enough that the #5 became very iffy, but at least I could get my leg in the crack and see what I was doing.   I left the #5 in place and bumped the huge #6 way up over my head and hung from it on the rope.

I wanted to find a place for the #5 because it was useless down below me at this point and I'd need to move the #6 one more time to get to the top without exposing myself to a potential ground fall as I mantled onto the ledge.

Trying to find a place to get the #5 next to the #6, I put a long alpine draw between my harness and the #6 so I could hang directly on the cam.  They allowed us to put enough slack in the rope to remove the #5 and fiddle with it.  I'd just broken rule #1 and was hanging off a single piece of gear (albeit one that was essentially bombproof) in a situation where a fall would have broken my legs.  I found a barely acceptable placement for the #5, clipped the rope to it and inched upward.  Two pieces!  Yay!

I grabbed the #6 cam and unclipped the sling that had been holding me to it, leaving the rope in place...or so I thought.  About 2 feet over the #6, I reached down for the #5 and brought it up to find it a new home.  Nothing.  It was totally useless.  At this point Ana informs me the #6 has come out.

What?  I looked down and the #6 is dangling from a sling.  Instead of unclipping the sling from the cam, I'd spaced out and unclipped the rope, leaving myself connected to the cam via a dyneema (strong as steel, but completely inelastic) sling. As I'd climbed past, I'd dragged the cam upward and out of the wall.

And this was the "good" outcome of my mistake.  The cam hadn't rotated and had instead been pulled in such a way that it slid out.  If it had rotated the cam would have stuck fast when the sling went taught and I'd have factor 2'd on a dyneema sling, potentially screwing up my internal organs or breaking the sling or the cam.

As it was, I was 15 or 20 feet up, hanging off a knee barely wide enough to stick in the crack, with zero protection. The only "right" thing I did the whole climb was keep my shit together, carefully reach down to get the #6, put it in the wall, and make myself safe.

(For future reference, a #2 and #1 fit side by side in the pocket up there and would probably hold a fall)

Huge screwup.  Huge, huge, huge.  Biggest one I've made, by far.  There are a lot of takeaways here, but mostly it comes down to not getting on climbs unless you've got more than enough gear to do them safely.  This one requires a pair of #6s to lead, as the comments on the online guide say.  Climbing, especially on gear, is no place for hubris.  I've got enough trad climbs under my belt that I've lost a little bit of the rational fear that helps keep you safe.  Lesson learned: stay scared.

Anyway, after that we climbed Slabalicious (5.10c) on toprope by walking to the anchors along the ledge at the top of Broken Dreams.  Really fantastic slab with marginal feet and a cool crux that has you doing weird stuff with one hand on the arete at the right and the other on tiny ridges. It was damp and nobody sent without a fall, but we'll be back for this one.